Use this page to find a wealth of information about Southwest Airlines corporate jeadquarters, their executive team, jobs/career pages, company history, and other useful resources.

We have also added information about how to complaint to Southwest Airlines, and how to contact the company via email, phone or social media.

Southwest Airlines began operating in 1971 and experienced rapid expansion well into the 1990s. International flights began in 2004. Today, Southwest is considered the world’s largest budget airline, serving over 100 destinations in the US, the Caribbean, and Latin America.

The airlines is member of Fortune 500 and its total assets are estimated at $23 billion.

Members of the public can reach the airline’s corporate headquarters by phone or in writing: 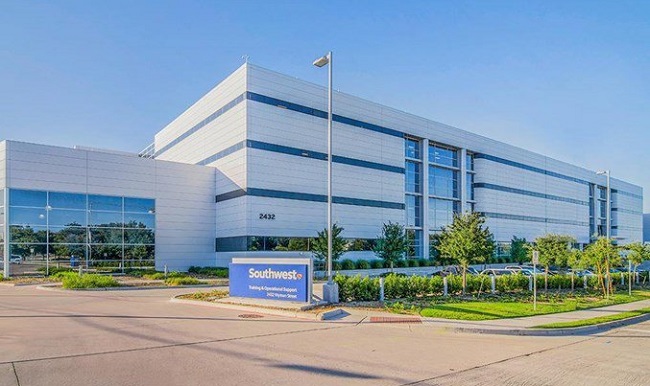 The Southwest Airlines Corporate Office, Headquarters is in a 900.000 square feet building located inside the Dallas Love Field Airport territory.
The company is currently building a $150 million extension west of Denton Drive, finished in 2018. The complex will include a 414,000-square-foot office building and an 367,000-square-foot flight training center with 18 flight simulator bays.

This is the full list of key leadership at Southwest Airlines.

Southwest Airlines Board of Directors:

View and apply to jobs with Southwest via their Careers page.

Alternatively, you can browse through vacancies using the airline’s Facebook Careers page or LinkedIn Jobs site.

How to complain to Southwest Airlines.

If you prefer to send a written complaint, send an email to [email protected], fill in the contact form under “Email Us”, or write to Southwest Airlines, P.O. Box 36647-1CR Dallas, TX 75235.

Contacting Southwest Airlines on Twitter is often the fastest option for minor issues, tweet at #SouthWestAir at twitter.com/SouthwestAir/with_replies and you will get a reply within 20 to 30 minutes.

Below is a list of useful resources relevant to media organisations, investors, and members of the public.

Rapid Rewards #20615671624 Calli A. Kilmer has residual travel funds of $328.00 due to a cancellation of a ticket for Fred Hefner, also on the account. Fred Hefner has had a stroke and is ICU in an Alabama hospital. My request is for my husband Paul Hefner to have access to the funds available so that he may travel to Alabama & return to ABQ as needed. I appreciate your understanding and compassion during this most difficult time. Fred’s prognosis is grim at best and however you can assist us in this life changing event will not be forgotten.
Sincerely,
Calli A. Kilmer
505 xxx-xxxx

How do you rate the customer service? (last company interaction)

Any cookies that may not be particularly necessary for the website to function and is used specifically to collect user personal data via analytics, ads, other embedded contents are termed as non-necessary cookies. It is mandatory to procure user consent prior to running these cookies on your website.